Experts: Tax reform not as likely to help small businesses 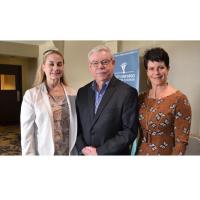 The impacts of the newly-approved federal tax reforms on small businesses have yet to be determined, but the gains may be minimal or non-existent, according to business experts.

The 20 percent tax deduction that large businesses will benefit from are not likely to equally benefit all small businesses, according to Jan Allen, a tax attorney and president of Allen Barron Inc.

“Congress gave large corporations (tax breaks) on the back of small businesses,” she said. “They ... are (also) taking a lot away.”

Allen, along with Ernie Cowan, vice president of government affairs at the North San Diego County Association of Realtors; and Maggie Osburn, senior vice president of employee benefits at HUB International, talked about the economic impact of the new tax reform at the Jan. 25 Insights forum in Rancho Bernardo. It was organized by the North San Diego Business Chamber.

What is known is that all small businesses will not be treated the same, she said. Among those potentially hurt by a different set of rules are those focused on health, law, accounting, the performing arts, athletics, consulting and financial services. In addition, the way a business is owned will matter as will the amount of money earned in a year.

“It takes most of us out and we will not get a (tax) break,” Allen said.

Business owners will be further limited in claiming deductions based on the amount of wages they pay themselves, she said. Consequently, the 20 percent tax break “could be completely eliminated.”

She said incentives to itemize deductions have been largely eliminated for many tax filers and many they used to benefit from have decreased. These include deducting medical expenses, state and local income taxes, foreign property taxes, personal casualty and theft losses not covered by insurance, union fees, brokerage fees, qualifying moving expenses (except for military) and there is a new deduction limit of $750,000 on new mortgages.

Allen said in expensive areas like San Diego the latter will likely affect many home buyers. The second home deduction has been eliminated too, unless it is an investment property.

“If you’re going to get a divorce, do it now, because by 2019 any alimony and spousal payments will be nondeductible,” Allen said. “This will radically change family law.”

“Clear as mud,” is how Osburn described the changes. “There is good news and bad news in this law that passed and more questions than answers.”

By eliminating the tax penalty for those without health insurance, Osburn said the young and healthy will likely drop their coverage. Those who remain in the exchanges will be those with medical issues. Consequently, health insurance premiums will greatly increase and more people will not be able to afford the higher costs, especially since the government subsidies for very low income people were eliminated. Also, fewer participants in the system will cause premiums to go even higher.

“It will be a death spiral to the exchanges ... (due to) astronomical prices,” Osburn said, adding that those without insurance will start using emergency rooms more for their primary care and costs will go up.

For some workers whose employers do not offer medical coverage, she said, “If your job is dependent on (the medical insurance) exchanges I would be looking for another job.”

Employers might also be less inclined to offer as many perks to their employees since they will not receive tax breaks on them. They include subsidizing parking fees, travel and services such as van pools and on-site cafeterias.

“The impact on real estate will be an ever changing moving target for awhile,” Cowan said.

According to Cowan, there are 92 million millennials and they are changing the world and real estate market. Being more mobile than generations before them, they are less likely to purchase a home, even though they indicate that is still a goal.

“They have a desire to own, but are delaying the purchase to later in life due to (a need for) mobility,” he said. “They do not want to be saddled with the burden of real estate.”

By lowering the amount of a mortgage that can be deducted, the incentive to buy versus rent has mostly been eliminated, so real estate agents will need to rethink their sales tactics, Cowan said.

“They will have to sell based on (promoting purchasing) as an investment, rather than a mortgage interest deduction,” he said.

Fewer homeowners in a community will likely have a social impact over the long term, Cowan said, explaining that after World War II, veterans using the GI Bill to purchase a home were largely responsible for creating suburbs where they planned to live the rest of their lives. They joined community organizations and took leadership roles. If a community has predominantly renters, there are fewer with long-term community ties.

Cowan said home sale prices are likely to dip in the future; not necessarily those below $500,000, but priced higher — the majority of properties in California. Combined with the region’s massive housing crisis, there could be serious consequences in the future.

“In California, there are 468 cities and half are bankrupt or (will be) but do not know or admit it,” Cowan added, citing their rising pension debt as a cause. “San Diego is one of those. ... Nobody is talking about the ticking time bomb. When cities face a reduction of services, that will hugely impact people’s desire to move to cities that are hit the hardest.”

“There is going to be a honeymoon period until we see the tax ramifications on the deficit and services received,” Allen said. “Now there is euphoria in the market.”

Warning about the consequences after the federal deficit balloons, Allen said consequential reductions in services will include Medicare and Social Security. “What happens to the individuals who are not as well off? Their needs do not go away.”